Kramer was founded in 1976 and was initially run out of owner Mary Lou Kramer’s basement. What began as a humble art production studio quickly grew into a company focused on providing state-of-the-art digital printing solutions.

Throughout the ’80s and ’90s, Kramer was recognized as a pioneer in the digital indoor and outdoor printing industry. The company continually upgraded its equipment, adding solutions that offered more and more cost-effective options to its clients.

Further growth and continual equipment upgrades helped Kramer to maintain its status as one of the top digital printers in the Dayton, Ohio, region. In December 2019, Duluth, GA, company Outdoor Image acquired Kramer, which enabled the company to extend its reach into additional markets.

Kramer’s existing MOI system (My Order Information) was a custom-built online ordering solution initially developed in 2008. This functionality had served the business well. However, the system was continually developed over several years and built using at least two different programming languages/libraries/frameworks.

As this system aged, it became increasingly difficult to maintain and was unable to scale with the needs of Kramer’s clients. The decision was made to modernize the MOI system, and Kramer reached out to Edge Webware for a solution.

Edge Webware worked with Kramer to develop extensive documentation on the existing features of their current MOI system. In addition to these features, the Kramer team outlined additional functionality needed in the new system to better meet their customers’ requirements and to improve the customer experience.

After reviewing the information gathered from our discovery phase, we developed a detailed project specification to rebuild the existing MOI system. The goal of the redesign was to update the system using modern programming languages and frameworks, standards-compliant code, and best practices in design and usability. This approach allowed us to develop a platform that would not only modernize the current version but also deploy a solution having the necessary capability to scale with both Kramer’s internal business goals and their clients’ evolving needs.

Edge Webware worked with Kramer’s team to launch a beta-testing phase for a select set of customers. These real-world user tests provided rich insights into the overall usability of the new system. The feedback we received led to several key interface improvements, resulting in an enhanced user experience for Kramer’s customers. 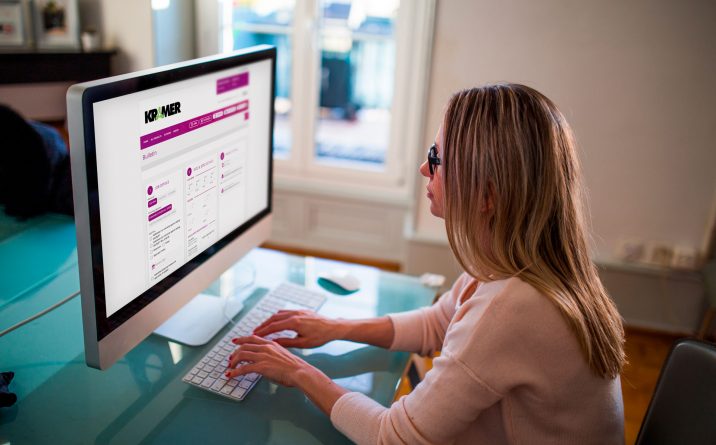 Some of the features include:

As part of our project scope, Edge Webware provides continual software maintenance for Kramer’s new system. This protects Kramer’s investment by keeping the code current, preventing the necessity for a major rewrite in the future. We also support and work with Kramer to optimize and add features to the application on a regular basis.

A Robust Ordering System Built on a  Modern Platform

Kramer’s new MOI—rebranded as Kramer Express—is completely redesigned with all the added functionality the previous version was lacking. They now have the ability to scale with their clients as needed. With our partnership, the platform’s functionality will stay up to date, providing a critical tool for Kramer’s team for many years of reliable service to come.

Incorporating significant feedback from customers during a beta testing period, the new system delivers a superior user experience, and the efficiency of order completion is smooth and intuitive. The online order proofing is another benefit that adds to the overall positive client experience.

With our partnership, the platform’s functionality will stay up to date, providing a critical tool for Kramer’s team for many years of reliable service to come.

How can Edge serve you?

A custom online ordering system is ideal for a company that has unique, complex business rules and goals. We can determine how your current ordering application could be extended, improved, or connected to other critical systems that run your business.

Partnering with Edge Webware can help you outperform your competition, improve operational efficiency, and exceed your customers’ expectations. Contact us today to get started!